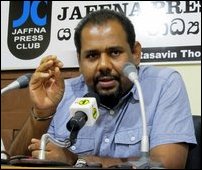 â€œIt is sometimes possible for journalists to misunderstand what is being said, and as a result misquote. But in this case, the major part of the said news item is entirely fabricated,â€ says Gajendrakumar Ponnambalam responding to Colombo-based English media Daily Mirror reporting his speech at the Press Club in Jaffna on Monday. While he had cited the report of Ms. Navi Pillai in appreciation for evidencing the grave violations committed against Tamils in the last one year, the Daily Mirror titled its news report on Wednesday as â€œPillai responsible, says Ponnambalam,â€ Gajendrakumar said. Following protests by Gajendrakumar, Daily Mirror carried another report on Thursday, titled â€œPonnambalam clarifies.â€ This was even more disappointing and completely inadequate, Gajendrakumar told to the TamilNet.Â Â

In a letter to Daily Mirror on Wednesday, Gajendrakumar protested the newspaper quoting him wrongly on UN investigations and on Ms Navi Pillai.

I have not said, â€œUN investigations will not be productive,â€ and I commended Ms. Navi Pillai for the report, Gajendrakumar said.

The Daily Mirror clarification on Thursday, â€œgives the impression that I only denied making the sentence “UN investigations will not be productive” and not all the references that the 27/02/2013 news item claimed I made about Ms. Navi Pillai,â€ Gajendrakumar told TamilNet.

Gajendrakumarâ€™s speech at the Jaffna Press Club during its inaugural session on Monday was in Tamil.

Media elements connected to a Tamil politician were responsible for the fabrication, informed circles said.

A full audio recording of the speech that appeared in TamilNet on Tuesday is available for judging the reporting.

On matters related to Tamil polity in the island, most of the media in Colombo and in Jaffna is now controlled by a combination of outside establishments and collaborative politicians, in order to engineer a particular line for the Tamil polity, senior media circles in Colombo commented.

Favourable news coverage given to the TNPF of Gajendrakumar was one of the reasons for a recent editorial change that took place in a leading Tamil daily in the island, at the instance of a High Commission and some Tamil politicians, the Colombo media circles further said.

Full text of the protest letter sent by Gajendrakumar to Daily Mirror on Thursday follows:

The substance of today’s clarification gives the impression that I only denied making the sentence “UN investigations will not be productive” and not all the references that the 27/02/2013 news item claimed I made about Ms. Navi Pillai.

As I stated in my email to you yesterday, all the references the 27/02/2013 news item claims I made about Ms. Pillai are a total fabrication. I once again ask that you publish my email to you (as found below) in full to put this matter to rest. To not do so, especially after todays so-called “clarification” of mine, will give a completely wrong impression that the only problem I had with the 27/02/2013 news item was with regards to the sentence “UN investigations will not be productive”, and not with regards to the references to Ms. Pillai.

I find today’s clarification even more disappointing and completely inadequate, especially after your office contacting me yesterday and admitted that the references in the 27/02/2013 news item which i was supposed to have made regarding Ms. Pillai, were in fact false!

Once again, I’m taking the liberty of copying diplomats on this email.

Hoping for an ethical response from you in this regard.

Full text of the protest letter sent by Gajendrakumar to Daily Mirror on Wednesday follows:

It was with an utter sense of shock that I read the news item captioned “Pillai responsible, says Ponnambalam” appearing on the front page of the 27 February 2013 edition of the Daily Mirror. The entire news item, apart from mentioning the fact that the Tamil National People’s Front (TNPF) had a press conference in Jaffna, and that I had stated that the TNA must stop cheating the Tamil people, is a total fabrication. I never said anything as carried in the said news item referring to Ms. Navi Pillai. Nor did I say “UN investigations will not be productive”.

On the contrary, the only time I mentioned Ms. Navi Pillai was when referring to the report that she submitted recently regarding the situation in Sri Lanka over the last year. I made the point that her report documents some of the grave violations faced by the Tamil people during the last year and I commended her for that. Further, my party’s consistent position has been that the UNHRC must call for an independent and credible international investigation regarding the breach of international law, including the crime of genocide, and that the set up of a transitional administration in the NorthEast, is imperative.

It is sometimes possible for journalists to misunderstand what is being said, and as a result misquote. But in this case, the major part of the said news item is entirely fabricated!

Accordingly I ask that not only a front page prominent retraction be made in your paper, but also that a public apology be tendered and that this letter be published in full. I request prompt action as this fabricated news item has the potential of doing damage.

I am taking the liberty of copying this letter / email to diplomats for their records.