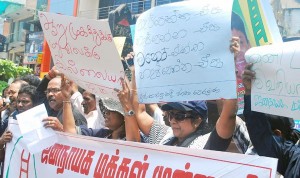 A protest was held yesterday (26) at Gas Paha Junction, Colombo against the attack on Plantation Trade Union Federation (PTUF) leader Mano Ganeshan at protest in Kotagala.

The member of the PTUF organized the protest.

Members of the Ceylon Workersâ€™ Congress (CWC) are suspected have led the attack on the protest, which was against the leader of CWC ArumugamThondaman.

The protest was organized on April 21st to express the opposition of the PTUF to the agreement signed between the employers, the CWC and UNP affiliated trade unions, regarding the salary increment for estate workers. They were demanding a daily wage of Rs 520 for estate workers, whereas Thondaman has agreed to a daily wage of Rs 450. Opposition members including Mano Ganeshan, Wickramabahu Karunaratne, Sirithunga Jayasuriya participated in the event.