The death toll from landslides and floods in Japan has risen to at least 20. Around 260,000 people living in the area have been ordered to evacuate, and 140,000 more were advised to leave their homes on the southwestern island of Kyushu.

Most of those killed lost their lives in landslides in and around the town of Aso, situated on the foot of a volcano in Kumamoto prefecture, one of the islandâ€™s four prefectures affected by the disaster. Many of the casualties were elderly people unable to leave their houses as water levels rose rapidly. 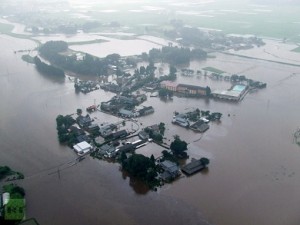 Up to 181 landslides occurred in the Fukuoka prefecture, damaging 820 houses and washing away three bridges, Hiroaki Aoki, the prefectureâ€™s spokesman, stated.

â€œTwo men were rescued from landslides but their conditions were not immediately available. One woman was still trapped,â€ he said. â€œI donâ€™t remember any flooding which stretched over such a wide area in our prefecture.â€

A riverside drive-in restaurant in the Yamakuni prefecture was inundated up to the roof, though water levels later subsided.

The Japanese Meteorological Agency expects more floods and landslides as severe showers continue to batter the island. Rainfall of up to 4.3 inches (11 cm) an hour was registered on Saturday. Heavy rains have been battering the southern island of Kyushu since Thursday. (RT News).