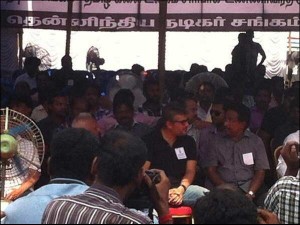 The agitation by SIAA to express solidarity with Tamils suffering in Sri Lanka saw the entire Tamil film industry activity coming to a standstill, as it drew support from directors, distributors, producers and technicians.

While addressing the gathering, Sarathkumar demanded that India should take action against Sri Lanka for alleged crimes against Tamils.
He read out seven resolutions adopted in support of Sri Lankan Tamils, including the one seeking economic sanctions on Sri Lanka till a probe is initiated.

One of the resolution thanked Tamil Nadu Chief Minister J Jayalalithaa for adopting a resolution seeking a referendum for Sri Lankan Tamils.
The Assembly had last week adopted a resolution, urging the Centre to take firm steps against Colombo till the “suppression” of Tamils was stopped and that those responsible for war crimes face a credible international probe.

SIAA also requested political parties and students not to commit self immolation over the Sri Lankan issue, but continue their protests in an ‘appropriate way.’

Hundreds of cine fans and activists gathered at the venue extending their support to the artists.