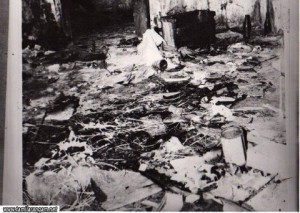 British Tamils Forum will hold a mass rally opposite Downing Street from 4pm to 7pm on Tuesday 23 July 2013 to mark the 30th anniversary of the Black July anti-Tamil pogrom of 1983.

An estimated 3000 Tamils were killed in July 1983 at the hands of Sinhalese mobs and military personnel, in an island-wide pogrom that was initiated and aided by the Sri Lankan state. Although Black July was not the first anti-Tamil pogrom to occur since Sri Lankan Independence, it marked a turning point in the history of the island â€“ as the unprecedented frenzy of violence forced Tamils across Sri Lanka to confront the reality that they would never be safe within a Sinhala-dominated state.

Sadly, the losses suffered by the Tamil people have only been compounded in the intervening years; the estimated 147,000 Tamils who are either dead or missing since the Mullivaikkal Massacre of 2009 show how far the Sri Lankan state has progressed in efficiently and openly attacking the Tamil people in full view of the international community. Accordingly, the necessity to reinstate the independent sovereignty of the Tamil nation â€“ to safeguard the rights and physical security of the Tamil people â€“ has also continued to strengthen since the terror of 1983; it is now more urgent than ever before.

In spite of this escalating persecution, the Sri Lankan state continues to be held in esteem by its international peers; indeed, it has even been awarded the opportunity to host the forthcoming Commonwealth Heads of Government Meeting in November, despite facing severe censure by human rights organisations and in the UN for the atrocities it has committed in recent times.

British Tamils are particularly hurt by the UK government’s decision to participate in this meeting, which will help Sri Lanka further cleanse its image abroad, while the persecution of Tamils on the island continues unabated and justice for the victims of past atrocities is nowhere in sight.

The UK government, along with much of the international community, claims to be pursuing a policy of economical and political â€œengagementâ€ with Sri Lanka â€“ believing the state can be gently prodded into treating the Tamils well. Yet it is telling that, despite thirty years of such engagement by the international community in Sri Lanka, there is still no sign of justice for the Tamils who were killed, hurt and displaced in 1983, let alone an independent, international investigation into the Mullivaikkal Massacre of 2009.

British Tamils Forum encourages all those who stand in support of the Tamils in Sri Lanka â€“ who continue to face violence, theft of their lands, rape, disappearance and military subjugation â€“ to attend this rally, to commemorate those who lost their lives and livelihoods 30 years ago and to call on the UK government to stop supporting the Sri Lankan state while its genocide of the Tamil people continues.