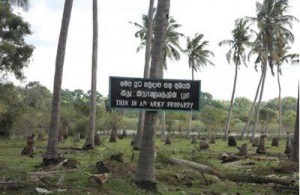 PMK founder-leader Dr S Ramadoss on Wednesday urged the United Nations and the Union government to immediately intervene in retrieving 7,000 sqkm of Tamil areas and prevent heavy militarisation of the Tamil provinces in Sri Lanka.

In a statement here, Ramadoss said the Lankan government had acquired 6,400 acres in north and eastern Valikamam for setting up the Jaffna Zonal Army Headquarters in continuation of the extensive militarisation of the North and Eastern provinces.

Stating that this area in Jaffna district was taken over by Sri Lankan army in the early 1990s, he said the government had now come out with this move at a time when there was expectation that the vast expanse of land would be restored to Tamils.

Pointing out that the Tamils used to lived in areas spread over nearly 18,880 sqkm, Ramadoss said 7,000 sqkm was taken away by the army after the end of war in 2009.

â€œIn these areas, army camps and habitations for Sinhalese have come up and around 2,500 temples and 400 churches have been demolished,â€ Ramadoss alleged.

Reiterating that Sri Lanka has been engaged in permanently stamping out the cultural identities of Tamils, he said the Tamil regions were witnessing rapid demographic changes.

â€œEfforts are on to make Sinhalese the majority people in traditional Tamil areas. All such actions go against all UN regulations.â€

Accusing President Mahindra Rajapaksaâ€™s regime of snatching the livelihood of Tamils, he said the Lankan government, rather than rehabilitating them in their native places, had deprived them of their land holdings and houses. â€œWorld nations including India and the UN must intervene and restore the lands of Tamils and halt militarisation of Tamil areas,â€ he appealed.