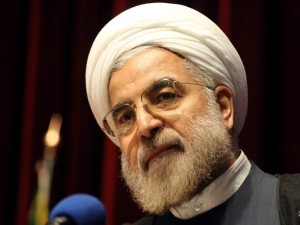 Mostafa Mohammad Najjar told a news conference in Tehran that Rowhani obtained more than 50% of more than 36 million votes cast in Fridayâ€™s election.

Rowhani was the lone moderate candidate supported by reformists in a race that once appeared solidly in the hands of Tehranâ€™s ruling clerics. He faced five other candidates viewed as more conservative.

The victory of Rowhani, 64, a bespectacled, bearded jurist who has long been a member of the inner power circle of the Islamic Republic, was a huge surprise, reflecting several factors, including a tactically adept campaign and a fractured alliance among his hard-line opponents.

Many observers had assumed that one of his conservative rivals would likely emerge victorious, or at least make it into a runoff election. But instead the conservative vote was split, analysts said, opening the way for Rowhani to pull away from the pack.

Only a week ago, Rowhani had been considered a long shot to make it into a runoff election. But he received the endorsement of a pair of former presidents, and a potential rival for reformist votes dropped out of the race, consolidating his prospective support.

Even Rowhaniâ€™s inner circle did not predict an outright victory, though his campaign had been polling well in recent days and advisers noted a sense of momentum. Enthusiasm was especially strong among the young, women and middle-class urban voters disillusioned with the nationâ€™s conservative leadership and the stalled economy. Rowhani also did well in voting from the seminary city of Qom, the nationâ€™s religious hub, results showed.

Though long regarded as a conservative-leaning cleric, Rowhani emerged in the last week of the campaign as a charismatic champion of reformist ideals, including enhanced personal freedoms, gender equality and artistic liberty. He also backed using foreign policy as a means to improve the nationâ€™s free-falling economy, battered by Western-led sanctions tied to the nationâ€™s controversial nuclear program.

Improving the moribund economy was the major theme of all six candidates. (Courtesy L.A Times)