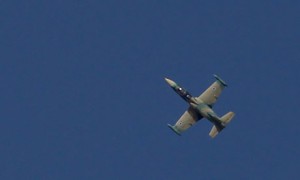 Moscow has denied claims concerning its â€œguidanceâ€ in downing a Turkish jet in Syria and â€œeliminating” two pilots after the crash this July. The assertion of Russian involvement was made on an Al Arabiya program based on â€œhighly-classified docs.â€

â€œIt is ridiculous even to comment on this nonsense, but, unfortunately, we have to,â€ reads the Monday statement. â€œThese far-from-harmless fantasies are based on ‘intelligence databases,’ obtained by Al Arabiya from open sources, including the official website of the RIA Novosti news agency.” It continued, â€œThe authors of this forgery did not even bother to remove the respective logo from the allegedly â€˜secret document.â€™â€

The response from the Russian Foreign Ministry follows an Al Arabyia claim of evidence showing that Russia was involved in downing a Turkish fighter jet in Syria in July, as well as the subsequent capture of two pilots. The allegations came out on a program aired on Saturday as part of a larger, special news magazine purportedly based on newly-leaked Syrian intelligence.

Foreign Ministry spokesman Aleksandr Lukashevich accused some Arab media of â€œunscrupulous and outright liesâ€ concerning the situation in Syria, allowing, though, that the world has gotten used to it.

â€œOf course, not claiming influence on the editorial policy of these media, we would like to advise the authors of such anti-Russian fantasies â€¦ to think more not only about moral principles, but also about their professional viability,â€ the statement read.

Al Arabiya insists that the â€œhighly-classified Syrian security documentsâ€ were obtained with the assistance of members of the Syria opposition.

â€œTwo Turkish pilots were captured by the Syrian Air Force Intelligence after their jet was shot down in coordination with the Russian naval base in Tartus,â€ the channel quoted one of the documents as saying, referring to the Syrian city that has given the Russian Navy Mediterranean access since the late Soviet days.

â€œBased on information and guidance from the Russian leadership comes a need to eliminate the two Turkish pilots detained by the Special Operations Unit in a natural way, and their bodies need to be returned to the crash site in international waters,â€ the document, allegedly â€œsent directly from the presidential office of President Assad to brigadier Hassan Abdel Rahman,â€ said.

Syriaâ€™s anti-aircraft artillery shot down a Turkish fighter jet on July 22 because, according to a Syrian military spokesperson at the time, it violated Syriaâ€™s airspace. The incident deepened the crisis between the neighboring former allies. Following the incident, Turkish Prime Minister Recep Tayyip Erdogan said his government now regarded Syria as a â€œclear and immanent threat.â€ (RT News).