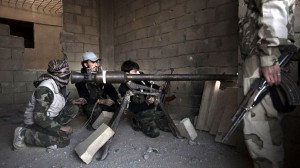 Russia said that decisions made at Thursday’s ‘Friends of Syria’ meeting will intensify the two-year Syrian conflict by encouraging rebel extremists. The remark came as the US agreed to send $60 million in non-lethal aid directly to the opposition.

The moves announced at the Rome meeting “in spirit and in letter directly encourage extremists to seize power by force, despite the inevitable sufferings of ordinary Syrians that entails,” Russian Foreign Ministry spokesperson Alexander Lukashevich said in a statement.

Lukashevich’s sentiments echoed remarks by Russian Foreign Minister Sergey Lavrov, who has repeatedly insisted that dialogue is the only way forward.

“It seems that extremists who bet on an armed solution to the Syrian problem have prevailed in the ranks of the opposition at this time, including the so-called [Syrian] National Coalition, blocking all initiatives that could lead to the start of dialogue,” Lavrov said in a statement on Tuesday.

Speaking after Thursday’s Friends of Syria meeting, US Secretary of State John Kerry confirmed Washington’s plan to further assist the Syrian rebels: “Given the stakes, the president will now extend food and medical supplies to the Syrian opposition, including the Supreme Military Council.”

The decision to provide assistance directly to the opposition represents a policy shift within the Obama administration. Until now, the US has never directly delivered assistance to Syrian rebels.

But it wasn’t just the US that vowed to increase aid to the Syrian opposition, which has been fighting for the overthrow of Syrian President Bashar Assad for almost two years. The European Union has also amended sanctions on Syria to allow the supply of armored vehicles, non-lethal military equipment and technical aid to the opposition, provided they are used to protect civilians.

But the Syrian rebels are unlikely to lay down their arms anytime soon, leading to fears of growing sectarian violence throughout the country.

Last December, the Independent International Commission of Inquiry on Syria found an increased presence of foreign fighters, many with links to extremist groups. The commission also found that civilians continue to bear the brunt of the conflict as the fighting moves deeper into urban areas.

While the US and European Union have refused to provide the Syrian rebels with weapons, Qatar and Saudi Arabia have no reservations. Though the two nations have not discussed specific weapons shipments to the rebels, both have been vocal supporters of arming the opposition.

“As there is no clear international opinion to end the crisis in Syria…we are supporting the opposition with whatever it needs, even if it takes up arms for self-defense,” Qatari Prime Minister Sheikh Hamad bin Jassim bin Jabr al-Thani said in a statement last week.

The leader’s views seem to align with Saudi Foreign Minister Saud al-Faisal: “My country believes that the brutality of the Syrian regime against its own people requires empowering the people to defend themselves,” he said in a statement earlier this month.

According to UN estimates, 70,000 people have died since the country’s civil war began in March 2011. Some 860,000 Syrians have fled abroad, and several million others have been displaced within the country. (RT News)