Qassem Aqlan, who headed a security team at the US embassy in Yemen, was shot dead by militants in the country’s capital Sanaa on Thursday, Reuters reported. The killing had the â€œfingerprints of Al-Qaeda,â€ a source said. 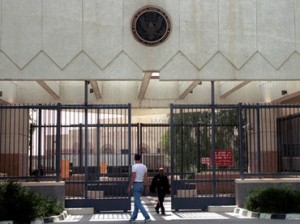 Masked attackers on motorbikes shot at Qassem Aqlanâ€™s car as he drove to work on busy Sittin Street early on Thursday. The attackers fled the scene after killing Aqlan.

The embassyâ€™s chief of security coordinated a US and Yemeni probe into the assault on the embassy. Last month, angry protesters attacked the embassy after the anti-Islamic video â€˜Innocence of Muslimsâ€™ triggered a wave of violent demonstration across the Muslim world.

Militants in Yemen have frequently targeted forces loyal to President Abd-Rabbu Mansour Hadi, who succeeded Ali Abdullah Saleh in February. Washington backs the new Yemeni government with arms, recon data and drones in its struggle against Al Qaeda in the Arabian Peninsula.

The latest attack on government forces in Yemen occurred on Wednesday when militants fired rockets and automatic weapons at a security checkpoint in the southern city of al-Dalea, wounding two law enforcement officers. The attackers fled the scene.

The US conducted a large number of â€˜signature strikeâ€™ drone attacks in Yemen over the last two years, killing both militants and civilians. In 2011, American citizens Anwar al-Awlaki and Samir Khan were assassinated in two separate strikes.

Since then, the CIA has asked for the authority to broaden its controversial drone program to areas in Yemen where Al-Qaeda members operate. The agency is reportedly aware that it relies on limited intelligence to conduct the strikes, and often kills targets even when their identities are unclear.

This controversial policy has sparked anti-US outrage in Yemen and elsewhere. Widespread backlash against similar strikes in Pakistan have all but forced Washingtonâ€™s capricious ally to condemn drone attacks in the country.

The US has encouraged the Yemeni government to crack down on the insurgents, who formerly controlled several towns in southern Yemen. In the spring of 2012, Al-Qaeda-armed militants were mostly driven out of Yemen, in part through US drone strikes. (RT News)