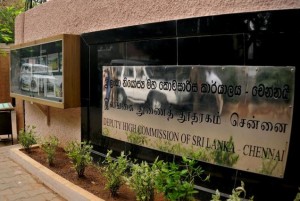 Buses in Tamil Nadu were attacked this afternoon because they had on board sinhalese from Sri Lanka. The convoy of five buses was headed to the Trichy airport to board a special flight home. Earlier today, the group of nearly 180 Sri Lankans were stopped by protesters after they left the famous Velankanni Christian shrine, 20 kilometres from Trichy. The Sri Lankans also faced protests yesterday during their visit to another shrine near Thanjavur. The incident comes a day after Sri Lanka issued a travel advisory asking its citizens not to visit Tamil Nadu until further notice in the wake of “increasing number of instances of intimidation” of Sri Lankans in the state. Over the weekend, in a much-criticised move, Chief Minister Jayalalithaa ordered that a football team that was visiting the state in a friendly match should be sent back to Sri Lanka immediately. Like her party, opposition members including the DMK, which is a member of the ruling coalition at the Centre, have attacked the union government for allowing Sri Lankan defence personnel to be trained in India. All Tamil Nadu political parties have taken a strong stand against the Sri Lankan defence forces who have been accused of atrocities against the local Tamil minority during the last stretch of the island’s civil war, which ended in 2009. (NDTV)]]>