There is an uprising against the brutal regime of Bashar Al Assad in Syria. There is a freedom struggle in Sri Lanka by minority Tamils against successive brutal regime whose brutality spread from putting a baby in boiling tar in 1956 to mass murder in 2009. 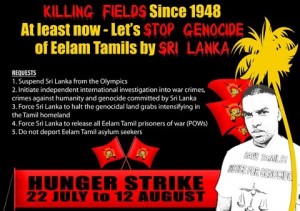 In Syria, the United Nations Organisation says that over 16,000 people have been killed. In Sri Lanka, the government itself has said there are over 90,000 war widows in the North and East of the country. From this 90,000 war widows, we can conclude that over twice that number of Tamils were killed during the brutal war against the Tamils.

The atrocity against the Tamils continues in Sri Lanka even after the war is over. The UN security council passed a Resolution 2043 to appoint Mr Kofi Annan as the peace envoy to Syria. He made several shuttle visits to Damascus, Tehran, Bagdad, Geneva, New York and even to Moscow. When Tamils were killed in thousands and deprived of supply of food, water and medicine, several international organizations requested UN secretary general Ban Ki Moon to make a visit to Sri Lanka to stop the war or to send an envoy. After his shuttle visits, Kofi Annan “called for the Security Council members to put aside their national interests and to put joint and sustained pressure on both parties with clear consequences for non-compliance,”. Whereas Vijay Nambiar, the envoy sent by Ban Ki Moon to Sri Lanka after several international media criticized him for non-action during the final stage of war, went to Sri Lanka and returned to New York after wasting his time in India, refused to submit a report to the Security Council about his visit to Sri Lanka.

When, over three hundred thousand Tamil people were caught in the war front and the government of Sri Lanka deliberately blocked the supply of food, water and medicine to them, not a single resolution was passed at the Security Council of the UN. When the diaspora Tamils requested for a motion at the UN against Sri Lanka, they were told such a motion would be vetoed by either China or Russia. Whereas, so far, three motions were put forward at the Security Council against Syria, and all three were vetoed by China and Russia.

Ms Navi Pillay, the head of UN Human Rights Council has told the UN Security Council that Syria should be referred to the International Criminal Court over its crackdown on anti-government protests. The Panel of Experts appointed by the UN Secretary General Ban Ki Moon concluded in their report that there is credible evidence for the war crime and crime against humanity committed by the Sri Lankan armed forces in the final stages of the war. So far, no one has referred Sri Lanka to the International Criminal Court.

(1) commit to work with the Envoy in an inclusive Syrian-led political process to address the legitimate aspirations and concerns of the Syrian people, and, to this end, commit to appoint an empowered interlocutor when invited to do so by the Envoy;

Similar commitments would be sought by the Envoy from the opposition and all relevant elements to stop the fighting and work with him to bring about a sustained cessation of armed violence in all its forms by all parties with an effective United Nations supervision mechanism;

(3) ensure timely provision of humanitarian assistance to all areas affected by the fighting, and to this end, as immediate steps, to accept and implement a daily two hour humanitarian pause and to coordinate exact time and modalities of the daily pause through an efficient mechanism, including at local level;

(4) intensify the pace and scale of release of arbitrarily detained persons, including especially vulnerable categories of persons, and persons involved in peaceful political activities, provide without delay through appropriate channels a list of all places in which such persons are being detained, immediately begin organizing access to such locations and through appropriate channels respond promptly to all written requests for information, access or release regarding such persons;

(5) ensure freedom of movement throughout the country for journalists and a non-discriminatory visa policy for them;

(6) respect freedom of association and the right to demonstrate peacefully as legally guaranteed.

In Sri Lanka, even three years after the “end of war”, abductions and killings, disappearances, fear of being sexually abused, land grabbing, candidates for election being threatened with murder, armed forces of the government interfere in every aspect of life and several other unreported atrocities prevail. In this situation, the Tamils of Sri Lanka also badly need a similar plan. Will anybody care? Will any international institution care? We have seen in the above paragraphs how the international community has turned a blind eye to the plights of  the Tamils. So, Tamils alone have to take action to draw the attention of the international community. At least a youth coming forward with a plan of hunger strike vigil and five points request.

Yes, Gobi Sivanthan who embarked on a two-week walk from London to Geneva to ask the UN to initiate an independent investigation into allegations of war crimes committed in Sri Lanka, will go on hunger strike to draw the attention of the international community to a five points request from July 22nd to August 12th in London, where people from all over the world will be participating and viewing the Olympic games. Please note that Syrians have been already banned from participating in London Olympic Games. Gopi Sivanthan’s five points request is:

Gopi Sivanthan’s five-point request in respect of Sri Lanka where over 170,000 innocent Tamils were killed by the Sri Lankan forces, should be, in my opinion given more importance than the six points plan put forward by Kofi Annan for Syria where 17,000 people were killed.

It is the duty of every Tamil to rally behind Gobi Sivanthan to open the eyes of the international community.