The occupying Sri Lanka Army (SLA) together with the SL Police on Thursday arrested former Tamil National Alliance parliamentarian and the political coordinator of the Tamil Eelam Liberation Organisation, a registered political party in the TNA alliance, for having put up posters remembering 54 Tamil political prisoners, including pioneer TELO leaders Kuddimani and Thangathurai, who were massacred inside the Welikade prison in Colombo in the SL state-sponsored pogrom against Eezham Tamils in July 1983. 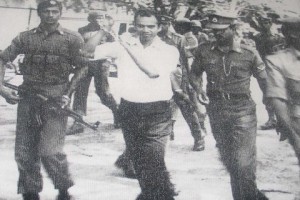 Mr. Sivajilingam was later released by the SL police at Nelliyadi, with the warning that he should not â€˜antagonizeâ€™ the military officers of the SL military.
Despite the explanation given by the former parliamentarian, the SLA has been harassing the former Tamil parliamentarian and the political activists of TELO for the past three days.

The posters they had put up at various places of Jaffna district were removed by the military.

Mr Sivajilingam, as in his capacity of the political coordinator of the TELO, had explained to the SL military that it was unjust on the part of the SL military to block a political party from remembering its slain leaders. It is a violation on the freedom of expression, he argued when the SL military confronted him at Nelliyadi Thursday evening.

Eyewitnesses told TamilNet that the Sinhala soldiers assaulted the TELO activists who accompanied Mr Sivajilingam while instructing the SL police to arrest them all.

After detaining for a few hours, the SL police released Mr Sivajilingam and fellow activists, telling them that the military officers were angry and that they should go home avoiding activities that could â€˜antagonizeâ€™ the SLA controlling the area.