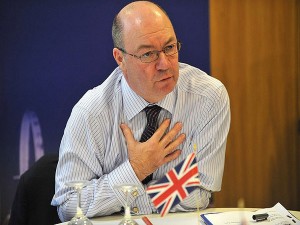 Alistair Burt the Parliamentary undersecretary of state at the foreign and the Commonwealth office in an opinion column on Sri Lanka said that despite the â€œfading of the manifestations of conflict, the root causes are notâ€.

â€œWhilst the manifestations of conflict are fading, the root causes are not. The military has retained its tight grip on the north. Yes there are fewer soldiers on the streets, but the Armyâ€™s presence is still palpable in many aspects of peopleâ€™s lives; Military Intelligence still question those who speak to NGOs and journalistsâ€ the opinion said.

Below is the full text of the opinion

When the Liberation Tigers of Tamil Eelam met their demise in 2OO9 at the hands of the Sri Lankan army, no right minded person mourned their fall.

Before the war the Tigers ruled the Tamils of the north and east of the island with an iron fist and brutally murdered countless civilians. During their campaign for independence they took terrorism to new levels of barbarity; it was the LTTE after all which pioneered suicide bombing. Yet the Government of Mahinda Rajapaksa defeated a truly reprehensible terrorist organisations with great severity. While the exact number is disputed, the UN Panel of Experts concluded that thousands of civilians died during the end of the war. The British Government’s position on accountability for this is clear – allegations must be investigated, and if crimes were committed, whether by LTTE or government forces, those responsible must be brought to justice.

I have just come back from visiting Sri Lanka to get a sense of the situation nearly four years after the conflict.Â  I visited the north and the capital, met ministers, NGOs, displaced families, and Tamils trying to rebuild their lives. Much has been done. The economy is growing and infrastructure in the conflict zone is being rebuilt and expanded; new roads are opening up routes to market for farmers and fisherman. Large areas have also been demined, allowing for a significant reduction in Internally Displaced People.

But whilst the manifestations of conflict are fading, the root causes are not. The military has retained its tight grip on the north. Yes there are fewer soldiers on the streets, but the Armyâ€™s presence is still palpable in many aspects of peopleâ€™s lives; Military Intelligence still question those who speak to NGOs and journalists. The transition to genuine civil administration is not moving fast enough. Likewise, not enough is being done to progress a political settlement that would give all Sri Lankans a clear stake in a prosperous, peaceful future. New roads are not a substitute for this. Worryingly, the past few years have also seen a decline in press freedom and a stifling of legitimate opposition across Sri Lanka. Many fear that their independent judiciary and proud tradition of vibrant democracy and activist journalism are being eroded.

Detractors point to a host of reasons why progress has been slow. Some argue that the Government is justified in reconciling on its own terms. They also point out, often accurately, that there is more to do by all sides to advance a political settlement. Others argue elements within the Tamil diaspora have not accepted the Tigerâ€™s defeat and pressure Tamils to reject dialogue.Â  Finally, some simply assert that the bitterness from 30 years of war mean many are just not ready to reconcile. Â

Yet there is one very good reason that the Government should do more; a reason well known to us from our own experience of Northern Ireland. If you don’t make every effort to give people a stake in politics and if you fail to hold to account those responsible for the crimes of the past, you sow the seeds for future conflict.

It is this message I tried to get across last week. Too many lives were ruined while the UK learned these lessons. Britain is a friend of Sri Lanka; a friendship based on history, cultural links and common institutions. And as a friend of Sri Lanka, it should be no surprise that we don’t want them to repeat our mistakes. President Rajapaksa has banished terrorism from his country and ushered in a new period of prosperity. It is now time for the political leadership needed to heal the wounds which caused the war. An important first step would be implementing the recommendations of Sri Lankaâ€™s own Lessons Learned and Reconciliation Commission.

2013 will be an important year in Sri Lanka: in November it plans to hold the Commonwealth Heads of Government Meeting. The UK has not yet made a decision on attendance. CHOGM is a time to recall the values uniting the Commonwealth â€“ values we have all freely agreed.Â  The Sri Lankan Government must think through exactly what will be seen when the international spotlight shines upon them.Â  As host, we look to them not only to adhere to the Commonwealth values of good governance, the rule of law and human rights, but to champion them.

Fundamentally though, these are not simply Commonwealth values, but the foundations on which all societies flourish. More importantly, they are Sri Lanka’s only route to genuine peace and a prosperous future for all its citizens; which is very much what the UK wishes for it.