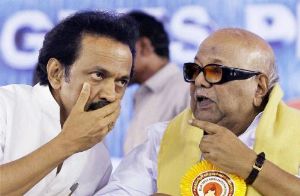 The government on Monday said that a decision on India’s stand on the United States resolution on Sri Lanka at the United Nations Human Rights Council will be taken only after a discussion with Dravida Munnetra Kazhagam chief M Karunanidhi .

Union ministers P Chidambaram, A K Antony and Ghulam Nabi Azad will hold talks with Karunanidhi on Monday, who had threatened that his party will pull out of the ruling United Progressive Alliance if it failed to move amendments to the US-sponsored resolution on the Sri Lankan Tamil issue at the UNHRC.

“Our three senior ministers are going to meet him (Karunanidhi). He has certain objections, certain suggestions. They will discuss with him the proposal that is coming before the UN, how to present it. Only after this discussion, government will take a decision,” Parliamentary Affairs Minister Kamal Nath told reporters outside Parliament.

Congress sources have been maintaining that the three leaders have been asked to convince Karunanidhi that government will not compromise with the interests of the Sri Lankan Tamils at any cost.

Both Chidambaram and Antony are said to have good rapport with the DMK supremo while Azad is the Congress in charge of Tamil Nadu affairs.

After threatening to pull out DMK ministers from the government on Friday, Karunanidhi had shot off letters to Prime Minister Manmohan Singh and Congress chief Sonia Gandhi, saying he feels “let down” by the “lukewarm” response of the government.

The US-sponsored resolution against Sri Lanka is expected to come up for voting at the United Nations Human Rights Council session in Geneva on March 21. (PTI)