The largest terrorist organisation in Sri Lanka is the Sri Lankan army, under its Defence Secretary Gotabhaya Rajapaksa. As a result he is not only able break up opposition meetings using thugs, but also control the entire economy through his siblings and relatives. This is what the respected US paper, Washington Post has to say. 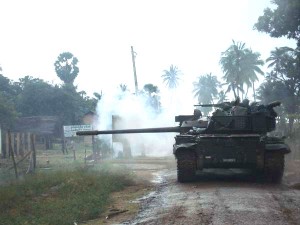 Â “The presidentâ€™s brother Gotabhaya runs the security apparatus and parts of the economy through the Ministry of Defence and Urban Development; another brother, Basil, heads the Ministry of Economic Development, and a third is parliamentary speaker. Other close family members serve as ambassadors or chief ministers, while a nephew runs the state airline.â€

Gotabhayaâ€™s security apparatus is faithfully aided and abetted by three Tamil lackeys, who are nothing more than dignified thugs. Two of them like Vinayagamoorthy Muralitharan alias Karuna and Douglas Devananda are ministers while the third, Sivanesathurai Chandrakanthan alias Pillayan is the Chief Minister of Eastern Province. They carry out white van disappearances, kidnapping for ransom and political reasons and murders.

The fourth and latest recruit in Gotabhayaâ€™s gang is Rishard Badurdeen, a Muslim minister in the Sri Lankan government. On 14 July 2012 his Muslim gang, carrying guns, stormed the fishing village of Koanthaip-piddi in Mannaar Town division and destroyed 23 fishing huts and two fibreglass boats with axes. As a result ethnic tension developed between Tamil Catholics and Muslims. In future it would not be necessary for the Sinhalese to attack the Tamils or Muslims. There are enough Tamil and Muslim traitors to do that job.

Â India and China may have conflicting points of view on many matters, but when it came to Sri Lanka their interests converge. They jointly and gleefully participated in the genocide in Mullivaaikkal in May 2009. Now they are hand in glove in exploiting the Tamil Homeland. In this the Sri Lankan military uses its power to do the needful. The Tamil Net report recently shows how the army grabs land for the Chinese projects.