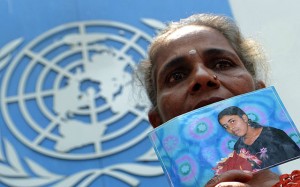 The torture of Tamil political prisoners is increasingly rife in Sri Lanka with some detainees dying in custody after suffering prolonged abuse, a new investigation claims.

The findings will intensify pressure on Britain to withdraw from a controversial summit to be held in Sri Lanka later this year.

Tens of thousands of ethnic Tamils have been held without trial since 2009, when Sri Lanka’s military finally crushed Liberation Tigers of Tamil Eelam (LTTE) rebels in a decades-long conflict for control of the island’s northern Jaffna peninsula.

Since then, according to a new report (pdf) by the London-based Sri Lanka Campaign for Peace and Justice, the government has regularly flouted laws and violated promises of post-conflict reconciliation through systematic abuse of these prisoners, many of whom had no links to the Tamil Tigers.

More than 100,000 people were killed on both sides of Sri Lanka’s 26-year territorial war between minority Tamils and troops from the Sinhalese majority government. Both the rebels and government forces were accused of widespread atrocities during the fighting.

But with Sri Lanka now regaining credibility through its revival as a popular tourist destination and its role hosting a major Commonwealth summit later this year, campaigners warn that unless pressure is put on the country’s leadership, a vital opportunity to secure lasting peace will be squandered.

Pressure is also mounting closer to home with calls for the Queen and David Cameron to boycott the Commonwealth heads of government meeting to be hosted in Colombo in November.

A Foreign Office source said on Friday that they had not ruled out attending the Colombo summit despite mounting unease over Sri Lanka’s human rights record, explaining it was “too early to talk about UK attendance”.

An FCO spokesman added: “The UK government has been clear in public and private that we have a range of concerns about post-conflict reconciliation, accountability and the protection of human rights in Sri Lanka.”

On Thursday, The UN’s human rights council passed a resolution highly critical of Sri Lanka’s record, encouraging the country to conduct an independent and credible investigation into alleged war crimes with a previous UN investigation, saying up to 40,000 people were killed in the final five months of fighting alone.

The report documenting the island’s human rights abuses was undertaken by Tamil and Sinhalese researchers from Sri Lanka and London, and specifically examined the treatment of detainees in the wake of a riot in the country’s Vavuniya detention centre last June, that triggered brutal police retribution.

It found that prisoners from the riot were kept in “abominable conditions and deprived of basic human rights”.Â  One case study documents the treatment of Ganesan Nimalaruban, an aspiring post office worker who was arrested in 2009 and subjected to three days of torture that left him with heart and respiratory problems, the report says. He later died in custody.

Nimalaruban’s family said their 28-year-old son was beaten regularly in prison and required frequent visits to hospital where, shackled on the floor and denied food and water, he also contracted dengue fever. Authorities claim Nimalaruban suffered a fatal heart attack because of the riot.

His mother, Rajeswari, insists her son died because of repeated beatings that police have attempted to cover up. She says her family, left impoverished by Nimalaruban’s legal battle, has also been subjected to intimidation.

Another case study describes the ordeal of an artist, identified as MM, who was arrested in 2007. The 28-year-old, who has suffered from polio since childhood, claims he was forced after days of torture into signing a false confession stating he had assisted Tamil Tiger rebels.

He said he had his toenails extracted and was then electrocuted, rendering him unconscious for three days. Now convicted, he has been sent to prison in the central city of Kandy, far from his home in the north. He has barely been permitted contact with his wife or son, who was born just months after his arrest.

The report also criticises a government rehabilitation programme for former Tamil Tiger soldiers that, it says, is also blighted by violence and, despite officially being classed as voluntary, is frequently used as a tool to prolong detention without trial.

The Sri Lanka Campaign report says the treatment of Tamil prisoners has, along with other human rights violations, been largely unnoticed by an outside world eager to believe that the country’s recent conflict is consigned to history.

Fred Carver, campaign director, said: “The report is an important reminder that not only were atrocities and war crimes committed on a large scale by both sides during the war but torture, arbitrary imprisonment and other human rights abuses continue on a large scale in Sri Lanka.

“This is particularly important in the light of continuing attempts by the UK government to deport Tamil asylum seekers, despite clear evidence â€“ to which this report contributes â€“ that those, such as returnees, who are identified by the regime as troublemakers are under considerable risk of falling victim to the worst kinds of rights violations: torture, murder, rape, and arbitrary detention.

“David Cameron must show leadership by announcing that he will not attend the Commonwealth summit if it takes place in Colombo.”

The island is currently enjoying a rejuvenation of its tourism industry. Lonely Planet, the travel guide book, recently voted Sri Lanka as its top tourist destination for 2013. (The Guardian)