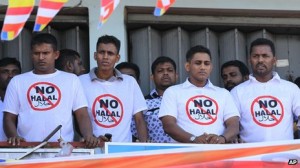 A new hardline Sinhalese Buddhist group in Sri Lanka has called for the abolition of the Muslim halal system of certifying foods and other goods.

The Bodu Bala Sena, or Buddhist Strength Force, also said foreign propagators of religions should leave the country within a month.

Thousands of supporters of the group attended a rally in a suburb of the capital, Colombo.

The calls come at a time of mounting religious tension in the country.

There have been several attacks on both mosques and Muslim-owned businesses as well as on Christian churches and the clergy, the BBC’s Charles Haviland reports from Colombo.

Thousands of men and women filled the grounds of the rally and the surrounding streets at Maharagama in Colombo’s outer suburbs to hear nationalist speeches by the group’s monks.

As we finished filming at the rally, our three-member BBC team and driver were seriously threatened with violence by some members of a mob of more than 20 young men who told us not to drive off.Some police arrived and looked on as my Sri Lankan colleagues were verbally abused in filthy language, described as “traitors” and accused of having “foreign parents” and working for a “foreign conspirator” who was “against Sri Lanka”.

Some of them warned us that if we returned to the location – the mainly Buddhist suburb of Maharagama – it would “be the end” of us.

The police held back the more aggressive youths but appeared to comply with the mob by barricading our vehicle, calling us “suspicious” and ordering us not to leave until they got the go-ahead from their superior. That was worrying.

As we waited for him, the mob took a large number of photos of us and our vehicle. A little later the senior policeman arrived. He seemed good-humoured and waved us off.

The leaders called for a boycott of halal meat and demanded shops clear their stocks by April, the AFP news agency reports.

The group’s secretary-general, Venerable Galaboda Aththe Gnanasara, told the crowds that “only monks can save this race”, referring to Sinhalese.

He claimed that Christian and Muslim extremists were threatening Buddhists, and said hundreds of monks were ready to fight. “Our country is a Sinhalese one and we are its unofficial police,” he said.

The group has denied being anti-minority, and has dissociated itself from the recent attacks on Muslim and Christian targets.

But one member of the group, Dilanthe Withanage, accused “some” unnamed countries of “funding Christian fundamentalists as well as Muslim fundamentalists” in Sri Lanka.

Both Muslims and Christians deny promoting extremism in Sri Lanka, our correspondent reports.

President Mahinda Rajapakse has called on monks not to incite religious hatred and violence, but one opposition politician told the BBC that “the situation is very bad”.

“Any moment, the ethnic riot will start between Sinhalese and Muslims,” said Mujeebur Rahuman of the opposition United National Party.

“They are now working freely. Nobody is talking about this organisation and the government is not trying to stop their activities.”

Muslims constitute about 10% and have generally had good relations with the Sinhalese majority. (BBC)