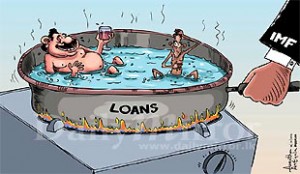 Sri Lanka on Tuesday dropped plans for a fresh $1.0-billion loan from the International Monetary Fund following disagreements over how the money should be spent, the central bank said.

The government announced last month that it was seeking a new cash infusion from the IMF after drawing down a previous $2.6-billion bailout loan six months ago.

“Sri Lankan authorities have decided not to pursue a new programme with the IMF, but to continue maintaining the close relationship with the Fund under standard consultation processes similar to many other member countries,” the central bank said.

Treasury chief Punchi Banda Jayasundera had said he wanted the new IMF loan to spend on infrastructure while the US-based lender was only willing to hand over money to bolster the bank’s foreign reserves.

“The IMF has indicated that the Fund may not be in a position to consider any direct or indirect budget support to Sri Lanka,” the bank statement said.

Money for foreign reserves is not meant for immediate spending, but serves to enhance a country’s creditworthiness.

The 2009 IMF bailout was secured when Sri Lanka’s foreign reserves crashed to a dangerously low level of $1 billion. They now stand at a comfortable $7 billion.

Faced with a balance of payments problem in 2011, the government hiked car imports by up to 300 percent, stopped credit for luxury imports and allowed the local currency to depreciate sharply by nearly 20 percent.

The government has revised down its growth estimate for 2012 from 7.2 percent to 6.5 percent.

Sri Lanka’s economy grew 8.3 percent in 2011, up from 8.0 percent in 2010, the first full year after government forces crushed Tamil rebels bringing an end to the island’s ethnic war. (AFP)