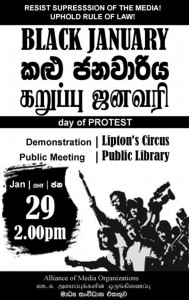 Journalists have decided to take to the street tomorrow and stage a peaceful demonstration to demand for justice over attacks on the media. The Sri Lanka Young Journalists Movement, a newly formed organization, said it will join the â€˜Black Januaryâ€™ protest to be staged at Lipton Circle tomorrow. â€œAs young journalists in Sri Lanka we are concerned that the government that silenced one of the worldâ€™s deadliest terrorist groups is unable to apprehend the killers of one journalist, the abductors of another, or those who launched violent attacks on media institutions,â€ the Sri Lanka Young Journalists Movement said. The movement claimed that journalists in Sri Lanka are not in a position to speak the truth to the public as their liberty to write freely has been curtailed. â€œFor these reasons we have decided to support the Black January protest campaign organized by the Alliance of Media Organizations. We request all young journalists and journalism students to take part in this protest campaign on 29th January at 2 pm at Lipton Circle,â€ it said. The month of January has been nominated as â€˜Black Januaryâ€™ in Sri Lanka by the Alliance of Media Organizations and its supporters. The campaign is a response to the attacks on the media that have occurred in the month of January in the past four years and the failure of the government to bring to account those responsible for attacks on numerous journalists whether in January or at other times of year. The campaign will also highlight the current lack of media freedom and threats to the rule of law in the country. The Sri Lanka Young Journalists Movement has over 200 young journalists as members and works towards strengthening relations with each other to develop a discussion among them on how to improve the quality of journalism in the country and safeguard the rights of journalists including the right to freedom of expression.]]>