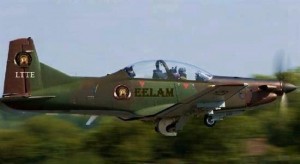 The expanded airstrip at Iranamadu, once used by the LTTE for its air operations, was declare open by Sri Lanka today.

The runway can handle aircraft such as the Hercules C-130 and Antonov AN-32.

Following the end of the war the airstrip was reconstructed and declared open in 2011 for light aircraft.

The LTTE had constructed a 600m long runway at the same site and destroyed it using bulldozers, prior to the Army retaking Iranamadu.

The reconstructed runway extends up to 1500m.