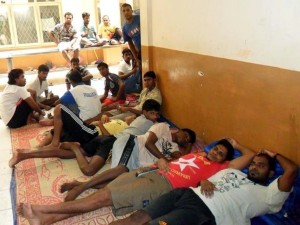 The media reports said that the six Sri Lankans were from a group of 89 detained at the center. They were demanding their transfer from the center.

Indonesian media reports said that the six Sri Lankans had fallen very ill after going without food for 3 days.

The Tamils will not be hospitalized despite falling sick, the Indonesian media reported.

â€œThis morning, we delivered the food to them, despite their hunger strike. But we could not force them to eat, â€ Pohan said.

The Directorate General of Immigration of the Ministry of Justice and Human Rights has indicated that the demands of the 89 Sri Lankan Tamils immigrants will not be met.