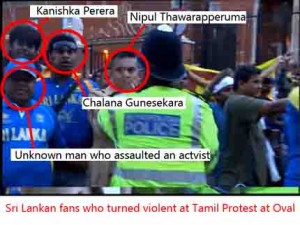 From the video footage Transtamils news team investigated on the people who initiated the violence against a peaceful protest by Tamil activists at London Oval entrance Last Monday.Â  The Ethnic Sinhala youth from Sri Lanka , currently lives in West London (Harrow) have been identified as people who were prominently took part in the ugly scenes of denying the right to express , further to Sri Lanka , in London.

The act have been hailed as â€˜Heroic act to save the pride of Sri Lankaâ€™ by Sinhala Facebook groups and Sinhala Facebook users.Â  The act was labelled as a â€˜continuing fight against Tamil Tigers around the world â€˜ and some Facebook groups which got thousands of Sri Lankan Sinhala members have called upon Sinhala youth to follow the London attackers and â€˜make another 2009 defeatâ€™ in USA,Canada, UK , France and Australia.

Nipul Thewarrpperuma, claimed to have studied at St.Peters College in Clombo ,Â  identifies himself as actor from West London, was hailed as hero for his violent behaviour at Oval. Chalana Gunesekara from Harrow (orginally from Colombo) , an amateur Sinhala singer , studied in Isipathana College ,is found to be involved inÂ  the assault in the video. Also Kanishka Perera, big-made man seems to have involved in the assault of an activist, also from Sri Lanka now claims as student from City of London College.

London Met Police was not prepared for the assault and badly calculated the risk of saving the protesters from such coward attack. Despite of the political differences between Tamils and Sinhalese communities the act of using violence is to be widely condemned.

Also there are growing fears of further violence against Tamils in foreign countries following this incidence and Tamils urge British Government to save their right to protest against Sri Lankan injustice . British Tamils Forum requested investigation into the Oval assault in order to protect the right of Tamils in United Kingdom. (LNW)