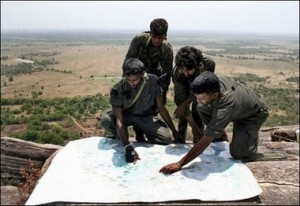 An organization calling itself theÂ  â€˜Peopleâ€™s Wall of Comradeshipâ€™ (PWC) which includes members of the JVP today said the authorities were constructing Military Camps in the Northern Province and focusing on militarisation instead of establishing democracy in the region.

They said about 6000 acres lands of the Northern people had been acquired by the military forces and alleged EPDP Para military group leader and Minister Douglas Devanandaâ€™s supporters of getting hold on to a land illegally in Jaffna.
PWC Co-Convener Sunil Handunnetti said people of all communities were facing difficulties because their lands were being controlled by the military and said several check points had been erected along the A-9 road recently.
He further said there were much prominent issues in the northern province that required the attention rather than the 13th Amendment.
â€œThe issues arising from internally displaced people, missing people, low income, unemployment, human rights violations, lack of Tamil speaking state officers and low basic facilities should be resolved before a political solution,â€ he said.

He said those who support the Police and Land powers issue in the 13th Amendment only want to control northern people just as the rest without solving their problems.