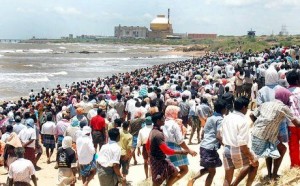 We all had high hopes that you would not permit the operationalization of the Koodankulam Nuclear Power Plant (KKNPP) considering your initial stand in favour of the peoples movement against Nuclear Energy. Unfortunately for some inexplicable reasons you changed your mind and permitted the NPCIL to go ahead with their plans. The well known disasters at Nuclear Power plants at Three Mile Island(USA), Chernobyl in the USSR, and Fukushima in Japan recently, have all highlighted the inbuilt dangers of producing electricity from nuclear power. Recently, the CAG has highlighted the laxity and inadequacy of the Atomic Energy Regulatory Board(AERB). ln addition to this, various other sources, including scientific analyses, have exposed the many shortcomings of the KKNPP reactor. Notwithstanding the claims made by the DAE and NPCIL regarding the reactor/s safety, it is indeed surprising that the Russians are reluctant to sign any liability agreement in case of an unfortunate accident. This in itself exposes their own fears of a likely accident for which they do not wish to be held responsible. Operation of another Nuclear power plant on the coast, in such close proximity to the existing one at Kalpakkam poses enormous threats to the marine life along the cost and to the livelihood of the fishing communities of the state. I would also like to point out that Nuclear power plants are huge guzzlers of fresh water, and in KKNPP I understand that water meant for the people is being diverted for the use by the Power plant, which for a state already suffering due to acute shortage of water, is completely unacceptable. The people of Tamil Nadu, continue to look forward to a safe and plentiful energy future under your sterling leadership. This can be provided in full in a shorter time, and with less cost and risk to the people, through the ample availability of renewable energy sources like wind, solar in your state. The current investment already made by the Government of lndia into the KKNPP will not be wasted as this can be converted into a gas fired power plant for just a little additional cost. As a former Chief of the Naval Staff I honestly believe that we are unnecessarily exposing our coastline and our people to hazards which can be easily avoided. I sincerely hope you will be guided by the needs of the people of Tamil Nadu and call upon the GOI and the NPCIL to stop loading the fuel rods into the reactor next week as advertised. With Highest Regards, Ms J.Jayalalitha CM, Tamil Nadu]]>