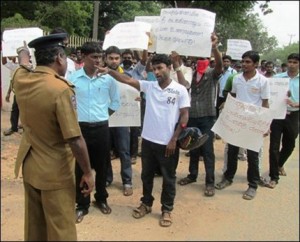 Sri Lanka Teachers Union thoroughly condemns the attack carried out against the students of Jaffna university. We thoroughly condemn the brutal attack carried out by the security personals against university students staged peaceful protest in the university compound. Speaking to media president of the union Joseph Stalin stated Government announced they have maintained peace situation for past three years. In such situation how can we accept the peaceful surrounding in the Jaffna peninsula? In the past army attacks protests campaign staged in the Jaffna peninsula and also this activity clearly proves people were not in a position to enjoy the independence and democracy in this country.]]>