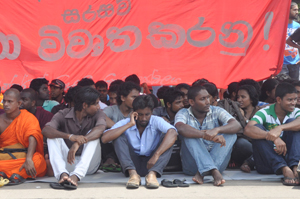 A student activist, Suranjith Bandara, has been admitted to hospital following an assault in the early hours of this morning (Dec. 30), said the IUSF. He is a member of the IUSF and former president of the Students Union of Kelaniya University. He had been on his was to his hostel at Munamalgahawatte in Kelaniya around 2.00 am when two men in a trail bike ambushed him, according to IUSF convener Sanjeewa Bandara. The assailants had gripped him by the neck and smashed his head on the ground, accusing him of having pasted posters against the Sri Lankan government and issuing death threats, said the convener. Police spokesman Prishantha Jayakody said a 4th year student of Kelaniya University had left Ragama Hospital following treatment for injuries suffered in a personal dispute. In a statement, the IUSF has urged the people having a love for democracy and human freedom to unite to defeat this threat.]]>