A suicide bomber has attacked the US Embassy in Ankara. At least one security guard working at the embassy was killed in the blast, as well as the bomber, who has been identified as the member of a banned leftist group.

The blast occurred at the entrance used by the embassy personnel and their visitors, CNNTurk reported. A security guard operating at the x-ray machine at the entrance was reportedly killed while the suicide bomber was passing through the scanner.

“There were two dead in the suicide bombing, a Turkish security guard and the bomber himself,” Ankara governor Alaattin Yuksel told reporters, AFP reports.

The US ambassador to Turkey, Francis Ricciardone, confirmed the death.

“We are very sad of course, we lost one of our Turkish guards at the gateâ€¦ The compound is secure, we all feel very safe thanks to your response,” he told reporters.

“It is my principle to speak only after receiving the final result, but I can say clearly that it is DHKP-C [Revolutionary Peopleâ€™s Liberation Party-Front],” he said. 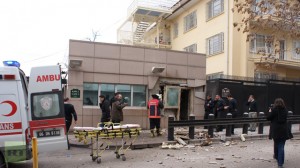 Turkish media reports have identified the attacker as Ecevit SanlÄ±, 30, a known member of the group. Sanli has reportedly spent time in prison, though the nature of his crimes is currently unknown.

Television footage showed a door blown and shattered tiles littering the ground by the buildings side entrance, though no damage has been reported within the embassy.

Witnesses told CNN’s Turkish service that a bomber was seen approaching the building, and later entered a gate at the fortified compound. Daily Vatan reporter KÄ±vanc El said in a televised interview that police also suspected that a suicide bomber had carried out the attack, Hurriyet Daily News reported. Body parts were also reportedly strewn around the scene.

However, one source at the nearby British Embassy who spoke with the Daily Telegraph contradicted Turkish media reports that the blast was caused by a suicide bomber.

“It was not a suicide bomber or car bomb. Someone left a package or threw a package,” the source said.

Initial reports said the blast occurred near the gates of the visa section of the embassy compound. Security has been tightened in the area, as there are fears that a second bomb could be detonated. All US embassy staffers have been taken to safe rooms inside the compound, a Daily Star reporter told NTV.

Dozens of ambulances and firefighters were dispatched to the scene. Two more people have reportedly been injured in the attack.

A female victim has been identified as former Turkish reporter, Didem Tuncay. Tuncay, 38, was reportedly at the US Embassy to file a visa application and suffered a head wound in the bombing, Hurriyet reports. She remains in critical condition and is currently receiving treatment at Ankaraâ€™s Numune Hospital.

The embassy building is located in an area near several other embassies, including those of Germany and France. Police have cordoned off the area, and journalists are being kept away from the scene.

In 2007, a member of a radical splinter group of the Kurdistan Workersâ€™ Party carried out a suicide attack in Ankara that killed nine and injured 121.

It is the foreign policy of the Turkish government that is partly responsible for political terrorism, Lawrence Freeman from the Executive Intelligence Review Magazine told RT.

“Turkey is very concerned about the situation in Iraq,”

“They are very concerned about the rising level of activity with the Kurds and the desire for a Kurdistan that would take off a part of Turkey. So I think this is very bad news as there is great opposition to it inside Turkey.”

Freeman believes the Turkish prime minister is“behaving foolishly to have this close working relationship with the West” as this will actually” undermine his whole country. (RT News)