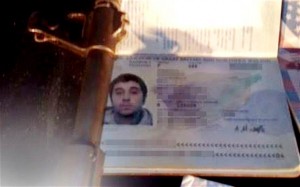 The television station said the man, who was apparently carrying a British passport, was shot dead while travelling with an American woman and another Westerner.

The three were taking pictures of military positions in Idlib province, near the border with Turkey, when they were ambushed by government forces.

Footage on state television showed a black car covered with bullet holes and bodies laid out with multiple gunshot wounds.

The Foreign Office has not confirmed the identity of the man, but the name on the passport seized by regime forces and shown on state television is that of 22-year-old Ali al-Manasfi from London.

The Al-Manasfi family from Acton, west London, on Friday said they were waiting for confirmation from the Foreign Office but feared it was him.

A family spokesman told the Telegraph: “We are sitting tight to hear but it looks like it could be him.”

They said he had been in Syria for four months, but had “disappeared” a few weeks ago.

The UK-based Syrian Observatory for Human Rights, which opposes Bashar al-Assad’s regime, has reportedly suggested the three foreigners, were working with rebels.

A Foreign Office spokesman said: “We understand that a British national has been killed in Syria. The family has been informed and is receiving consular assistance.”

In an earlier statement the FCO said it was still seeking information, adding: “The UK has warned for some time against all travel to Syria.”

The American woman has been identified as 33-year-old Nicole Mansfield of Flint, Michigan. Her aunt told Reuters that the FBI had informed her of the death of her niece, but said she did not have the details of how she died.

Ms Speelman said Miss Mansfield, a single mother of an 18-year-old daughter, had converted to Islam about five years ago but that she did not know when her niece had travelled to Syria.

Britain has withdrawn all diplomats from Syria amid the escalating bloodshed.

The attack is said to have happened on Wednesday, a week after a British doctor was killed in Idlib province.

Isa Abdur Rahman, 26, a graduate of Imperial College London who had travelled to the country to treat injured civilians, died when a makeshift hospital was shelled.

Fighting has been raging in Syria with the international community still at loggerheads over how to resolve the crisis.

Earlier this week the EU agreed to lift its arms embargo so that Britain and France have the option of supplying weapons to rebel forces. (The Telegraph)