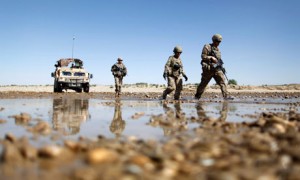 The Taliban forced dozens of primary schools in southern Afghanistan to close for two months when provincial officials banned motorbikes â€“ the Afghan insurgents’ favoured form of transport â€“ according to the United Nations.

The government eventually caved in after watching children go without school and their families sometimes without food, because the schools were used as aid distribution centres.

The school closures were detailed in a report warning that the conflict in Afghanistan is getting more complex, and the civilian death toll is rising. It was published the day after a suicide bomber killed 17 people as they boarded commuter buses near the supreme court, the deadliest attack on civilians in Kabul for nearly a year.

“A growing number of local militia and other armed groups are targeting civilians through intimidation, coercion, extortion, abuse and targeted killings,” the Monthly Humanitarian Bulletin said, echoing earlier warnings from the International Committee of the Red Cross about a fragmenting insurgency.

“Some of the intimidations are directly linked to the ongoing conflict, others are triggered by historical underlying tensions such as local rivalries, power play and tribal feuds,” the UN added.

Nato forces are heading home, leaving Afghan troops to lead the battle against the Taliban in most of the country, but the withdrawal of foreign forces is not bringing the reduction in violence that some had hoped for.

The number of civilians admitted to hospitals for war-related injuries rose sharply this year compared with 2012, and conflict-related admissions nearly doubled in Helmand province, where Britain has focused most of its troops and aid money.

“This not only indicates a spike in violence and the human suffering caused but also places additional burdens on health facilities in insecure areas,” the UN report said.

The number of people who have fled to another part of Afghanistan because of violence has risen above half a million for the first time. The closure of primary schools in Zabul province, around 200 miles (300km) from Kabul, was described as a particularly extreme case of the intimidation that led many of the internal refugees to abandon their homes.

“A district school principal was threatened by the armed opposition who demanded temporary closure of the schools in the district,” the report said. “After authorities caved in to insurgent demands and lifted controls on bikes, there was no further violence reported against principals or teachers in the area.”

Negotiations secured an agreement to reopen the schools when the summer term begins, but the area must be watched closely to check that the Taliban stick to their side of the deal, the UN cautioned. (The Guardian)