THEY were sent by their families on a terrifying 20-day sea journey which left them so seasick they vomited blood and with no food or water for the last week.

Two Sri Lankan boys in detention on Christmas Island today told The Daily Telegraph how they feared the police or the Sri Lankan Navy would stop them. 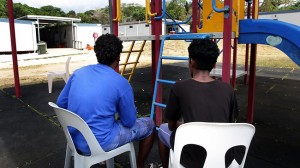 The latest were brought ashore beaming at Christmas Island at 11am this morning, bringing the total number of Sri Lankans to arrive this year to more than 1500.

Sri Lankan children are among the 76 unaccompanied minors housed at the Phosphate Hill detention centre on Christmas Island.

A 17-year-old schoolboy who has left his parents behind in Sri Lanka said he feared being put in jail if he was stopped leaving on a rickety fishing vessel by the country’s Navy.

He arrived with a group of Sri Lankan children two weeks ago.

“It was very bad, for five days we had no food, no water, it was very, very scary,” he said.

He said of the prospect of being stopped by the Navy, police or army personnel: “We were very frightened.

“It is five to six years jail. It is very dangerous, if police stop you. This is a safe place, there’s freedom in this country.”

More than 60 passengers on their boat slipped out of the country at night and chose an area to launch from without police around, he said.

The boy and a friend who was also on the boat said as Tamils they faced violence and persecution in Sri Lanka, which has been torn by civil war.

In the detention centre the boy said he had been playing football and cricket.

A group of 49 Sri Lankans were brought ashore at Christmas Island this morning.

The men smiled as they set foot on the jetty at Flying Fish Cove.

They were taken to the island’s processing centre for security and identity checks as well as a chest x-ray to check for TB.