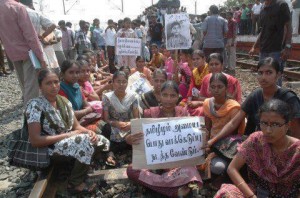 TheTamil Nadu Tamil film industry will put a stop to exports of Tamil movies to Sri Lanka if the UN doesn’t charge Colombo with “genocide” of Tamils, a known filmmaker said Wednesday.

“If the union government does not take a favourable decision on this issue, then we don’t mind breaking all ties with Sri Lanka,” the president of the Film Employees Federation of South India told IANS.

“We will ensure no Tamil films are screened there,” he added.

India has said it will bring in amendments in a US-sponsored resolution at the UNHCR in Geneva denouncing Sri Lanka for rights abuses and more.

On Tuesday, the Tamil film industry observed a day-long fast to protest the alleged killing of a large number of Tamil civilians by the Sri Lankan military in the war against the Tamil Tigers.