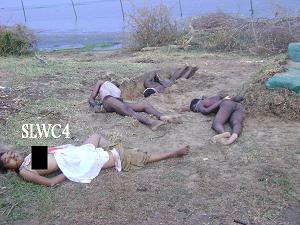 A Photographic Exhibition by a Tamil refugee living in Australia.

According to the UN Human Rights Commissioner, Navi Pillay, genocide was, and is, being repeated in Sri Lanka, and once again the world is averting itsâ€™ eyes. â€œRwandaâ€™s lessons were not implemented in Sri Lanka,â€œsaid Pillay, whose authority on this matter comes from her position as president of the International Criminal Tribunal for Rwanda.

During the last days of the 28-year Sri Lankan civil war in May, 2009, the outside world was shut out when the remaining monitors from the UN left the war zone fearful for their own safety.

However, the world is finally awakening to the Sri Lankan military atrocities against the Tamil civilian population through the stark, vivid images recorded by survivors, and smuggled out of the country.

One of those photographers is now a refugee in Australia. â€œ*Nilavanâ€, who worked for Sri Lankan media, covered the war for many years and was there until its very last days in the north-east, where, according to UN estimates, at least 40,000 people were deliberately slaughtered.

Nilavan took more than 500 photographs as the Sri Lankan military pursued itsâ€™ genocidal actions, which a UN special commission has demanded be investigated as war crimes and crimes against humanity.

These haunting images offer proof â€“ along with notable works as the UK documentaries â€œSri Lanka’s Killing Fieldsâ€ and â€œNo Fire Zoneâ€ â€“ of the militaryâ€™s pre-meditated campaign to target innocent civilians and will not allow history to hide the truth of this murderous regime.

As yet, no-one has been brought to account for what happened towards the end of the war, and the international community, including Australia, continues to compounds itsâ€™ disgraceful inaction on the events of May, 2009 by ignoring the on-going Tamil genocide in Sri Lanka. (The exhibition also has images that show undeniable evidence of recent torture of Tamils).

The war crimes of 2009 and the continuing genocide are the reasons why people flee Sri Lanka and seek asylum in Australia. Yet the Australian Government and the Opposition not only remain silent on these crimes but have a policy of engagement with the Sri Lankan Government in order to stop the boats.

It is not only cruel and inhumane, but also self-defeating. By turning a blind eye and â€œengagingâ€, our Government is giving the Sri Lankan regime the go-ahead to continue the terror that forces people to flee.

It is as plain as the scars on the backs of so many Tamil torture victims that the only way to stop the boats is to stop the terror. It is time to acknowledge the truth of the genocide in Sri Lanka, then and now; a truth told in graphic reality in this exhibition.

Warning: Images may cause distress.