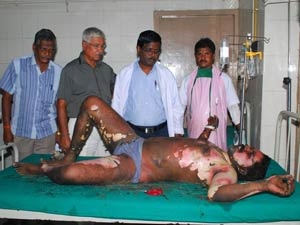 With heat on the Sri Lanka issue picking up, a 45-year-old man attempted self-immolation to press the Union government to vote against Sri Lanka United Nations Human Rights Council (UNHRC) for war crimes.

Police said S Mani, 45 from Nallavadu, arrived at the Cuddalore collectorate in northern Tamil Nadu with a can of kerosene. He doused himself with kerosene and set himself ablaze while raising slogans against the Union government for failing to protect the Sri Lankan Tamils, many of whom were killed in the civil war in the island nation.

Policemen on duty and passersby rescued him and admitted him in the Cuddalore government general hospital.

Mani is battling for life after sustaining severe burn injuries in the suicide bid.