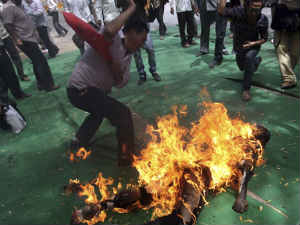 Naam Thamizhar party cader Nallavadu Mani set himself on fire in Kadaloor, Tamil Nadu, on Monday for his demand for declare ‘Rajapaksa a War criminal ‘.

Shouting slogans against the ‘genocide’ of ethnic Tamils in the island nation and holding Rajapaksa responsible for ‘war crimes’, Mani, took his colleagues by surprise by dousing himself with kerosene and setting himself on fire.

He was rushed to a nearby hospital and his condition is stated to be critical.