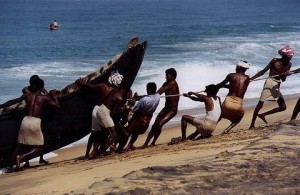 A group of Tamil Nadu fishermen claim they were attacked near the Katchatheevu Island in Sri Lankan waters yesterday.

The Press Trust of India quoted the fishermen as saying that they were attacked by the Sri Lankan navy, an allegation Indian fishermen continued to raise even during the war.

According to the Indian media report 12 fishermen from Thondi in the Ramanathapuram District, were fishing in a mechanised boat when they were surrounded by, who they claim were sailors of the Sri Lankan Navy, who attacked them with sticks.

The Indian claim their fishing nets were also cut while the fish were thrown back into the sea. They also claimed that their GPS equipment and cell phones were seized.

The fishermen arrived at Rameswaram on last night and were treated as out-patients and given some pain killers and ointment by local doctors, the Indian media report said.

The alleged attack comes after a brief lull in such incidents. In a welcome gesture, Sri Lankan Naval personnel, had on January 24 offered refreshments to a group of fishermen from Rameswaram when they were fishing near Katchatheevu.

Minister of State in PMO V Narayanasamy had last month said India and Sri Lanka were close to clinching an agreement on drawing a fishing boundary in the Palk Strait to avoid incidents of attacks on Tamil Nadu fishermen.