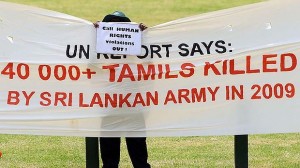 Eleven Tamil refugees have arrived in Los Angeles to begin their new lives after receiving care in the UAE for six months.

“We can now lead a life without fear and don’t have to live as refugees any more,” said Sivabalan Niranjani, 35, of the harrowing journey that ended when she landed in Dubai. She arrived in the US with her husband and two children yesterday.

Mrs Niranjani was seven months pregnant when she and 44 others set sail from India by boat last October to seek asylum in Australia.

Five days later their boat broke down and they had to be rescued by the Singaporean ship Pinnacle Bliss, which was en route to Jebel Ali.

When the group arrived in Dubai on October 23, the United Nations High Commissioner for Refugees (UNHCR) notified the UAE of their presence.

Although the Emirates is not a signatory to the 1951 Refugee Convention and not legally obliged to allow refugees to stay, they were allowed to disembark and the UN agency was granted access to determine the legitimacy of their claims for asylum.

While waiting for asylum, Mrs Niranjani gave birth to a girl in December at Dubai’s Latifa Hospital.

“Our children will get a better life,” she said. “We want a life of peace and no war. We have been praying for this.”

Babar Baloch, a spokesman for UNHCR, said the refugees’ departure was arranged by the International Organisation for Migration.

“Authorities in the US will handle refugees that have been accepted for resettlement,” Mr Baloch said.

Of the 46 who arrived in Dubai, including Mrs Naranjani’s baby, seven were sent back by the UN as they were deemed not to be in need of international protection.

Eight were sent to Sweden and one went to the US earlier. After another 11 left for the US yesterday, 19 are left in the UAE to continue their wait.

Shanta Kansaropan, 35, was also among the US group. She said three of her children, her mother and her brother all died while trying to flee Sri Lanka for India in 2009.

“I hope God won’t test us again and will give us a good life finally,” Mrs Kansaropan said. “It is better for us to die than return to Sri Lanka. We are lucky for this new lease of life but sadly our children won’t be with us.”

Many of them had been living in India, which lacks refugee laws, for several years before trying to make it to Australia. Once they are in the US, they can apply for permanent residency after five years if they have committed no crimes.

Meanwhile, the 19 remaining say they will die if they are sent back to Sri Lanka.
“We don’t know when we can leave,” said Akaliniyan, who was using a pseudonym. “We hope this ordeal will end soon.

“If we go back to Sri Lanka, we will not remain alive. We don’t need any comforts or luxury. We are happy to live anywhere. But in our country, we will die every day.”

Mr Baloch said the UNHCR was continuing efforts to find long-term solutions for them outside the UAE.

“According to our staff, the refugees are being well looked after and are being attended by the UAE Red Crescent,” he said. “They receive three hot meals a day with full access to health care and sanitation facilities.”

Kulasegaram Geetharthanan, a lawyer with Jein Solicitors in the UK, has submitted asylum applications to several consulates in Dubai on their behalf â€“ including Sweden, Switzerland, Canada, Germany, Austria, Ireland and the UK.
Mr Geetharthanan said the refugees, who were housed near the Jebel Ali port, needed to be able to contact loved ones at home and a counsellor.

“A telephone or fax facility would help them contact their family,” he said. “This would make them feel more safe when they can share emotions with people they know.

“There is also need for a counsellor to provide regular psychological support. Their mental state is not good because they are away from family and we need to get a counsellor to talk to them, at least on the phone.”