Four Lankan Tamil refugees have been abducted by a group of unknown men in a white van at around 6:00 p.m. on Sunday. The refugees were abducted from the Kavankarai refugee camp situated near the Poolal Police station in Chennai.

The abducted refugees have been identified as Suresh Kumar, Ramesh, Umesh and Suya. Suresh Kumar (33) is a father of three children. 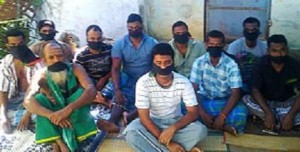 According to eye witnesses, the abductors have also taken the bicycles used by those four refugees.

Following the abduction, the wife of Suresh Kumar, who arrived at the Poolal Police station with their three children, alleged aloud that the Q-branch of the Tamil Nadu police was responsible for the abduction of her husband. In a highly dramatic move, she also doused herself and the three children in kerosene and threatened to set themselves on fire, unless her husband is released.

However the situation was brought under control by the police and she was later removed from the police station premises, reports said.

In the meantime, the Rameswaram Police have launched an investigation into the disappearance of two hundred Lankan refugees for the camps in Rameswaran in recent weeks.

Tamil Nadu has been providing shelter to Lankan refugees in 110 camps over the past three decades.