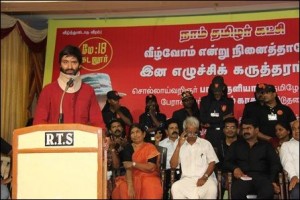 The visit of Jammu Kashmir Liberation Front (JKLF) leader Yasin Malik to Cuddalore on Saturday for a public meeting organised by the Naam Tamizhar Katchi witnessed high drama, with the police denying permission for the event.

Malik later spoke at an indoor meeting held as part of a day-long pro-Eelam symposium by the Seeman-led party.

Pointing at similarities between the struggles in Kashmir and Sri Lanka, Malik said, â€œYou are not alone in this struggle. We are together. Our sufferings are the same. I am here to show solidarity with the Tamil people in Sri Lanka, who are affected by war. But unfortunately, the permission to the public meeting was withdrawn at midnight. It is undemocratic.â€

Malik said military operation was launched against the Tamils in Sri Lanka while the dialogue process was on and accused the army of killing thousands of people there.

â€œYou can kill people but you cannot kill the idea and the ideology. It will pass on to the younger generation. Throughout world history, no freedom movement was defeated. Right now, Kashmir is the most militarised zone in the world. Every military option was used to break the will of the people there but they could not succeed,â€ Malik said. He urged Gandhians to protest against the massacre in Sri Lanka.

â€œWe all should come together to oppose the imperialist power in the whole world,â€ he said.

Earlier on Friday night, the police cancelled the permission for the partyâ€™s public meeting at Manjakuppam ground and pulled down several banners and hoardings put up by the cadre carrying pictures of the LTTE chief V Prabakaran.

On Saturday morning, Seeman and other leaders, along with Malik, arrived at the marriage hall for the day-long event and went into a huddle. Seeman then invited Malik to speak at the indoor meet.

He added, â€œI am working hard to bring together the people of Tamil Nadu under one banner: Tamils. They should drop their caste identities and should unite as Tamils.â€

A heavy posse of police was deployed at the venue of the meeting.

A little after 10 pm, even as Seeman was speaking, policemen entered the meeting hall and asked the crowd to disperse. This was followed by a scuffle between the policemen and the partymen and a round of slogan-shouting by the members against the police. However, Seeman appealed for calm and left the venue following which the crowd dispersed.