<![CDATA[Jaffna Bishop Rt. Rev. Thomas Soundaranayagam has told the visiting US state officials, â€œThe people of Sri Lanka are still in fear of disappearances that continue. The Defence Secretary has recently said that there were no disappearances and arrests. However, a large number of people are living in tears since their loved ones have disappeared or arbitrarily taken into custody.â€ <a href="http://www.eelamenews.com/?attachment_id=99809" rel="attachment wp-att-99809"> 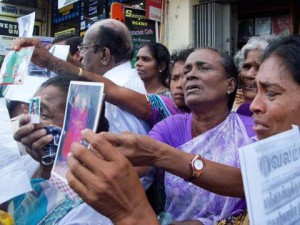 â€œThe war is still not over. People are still disappearing. There have been many disappearances, abductions and arrests in the last few months alone,â€ the Bishop has said. The Bishop has also told the US officials that laws were being passed in parliament to violate the rights of the minority communities and that the international community should put pressure on the government to work towards reconciliation among communities and to establish law and order in the country. The Bishop has said that the militarization in the North continued and explained the incident where Jaffna University students were assaulted and arrested by the security forces last November. Rev. Soundaranayagam has further noted to the US officials that the government was purposely delaying the holding of the Northern Provincial Council election and that the resettlement of people in the North has still not been completed. US shocked at military report The US officials currently engaged in a tour in Sri Lanka have expressed their shock at the report issued by the military challenging the report of the Lessons Learnt and Reconciliation Commission (LLRC) that has proposed an investigation into allegations of war crimes and crimes against humanity during the period of the war. TNA MP M.A. Sumanthiran has told BBC Sandeshaya that the US delegation had expressed their shock at the military report during a meeting with TNA representatives in Colombo. The TNA has stated that the Sri Lankan governmentâ€™s failure to implement the resolution that was passed at the UN Human Rights Council (UNHRC) was a clear indication of whether the LLRC recommendations are being implemented. The report by the military was handed over to Defence Secretary Gotabhaya Rajapaksa by Army Commander Lt. Gen. Jagath Jayasuriya. No military training for war criminals It is learnt that the US has removed Sri Lanka from its military training programme due to allegations of war crimes and crimes against humanity that have been leveled against members of the military. American law does not permit for providing military training to an army accused of committing war crimes. (LNW)]]>