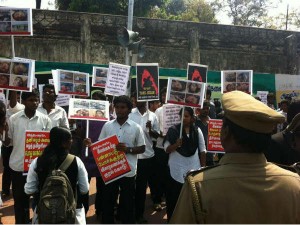 Demanding a UN referendum for Tamil Eelam in Sri Lanka, they also called for an independent, international probe against the alleged atrocities committed against the Tamils by the Lankan Government.

Addressing the large gathering, comprising mainly youth and students, Vaiko vowed to continue to pressure the Centre to vote against Sri Lanka at the UNHRC.

â€œWe will also put pressure on the international community to get justice for the Lankan Tamils and one day we will achieve it,â€ he said.

The MDMK leader pointed out that prompt action was taken by the Centre when two Kerala fishermen were killed by Italian marines. â€œBut when Tamil fishermen are killed by the Lankan navy, the government does not take it seriously,â€ he said.

On Sunday morning, Vaiko addressed around 250 workers, employees of Ashok Leyland, at Ennore. The workers, hailing from different trade unions, political, religious and community outfits, staged a fast in support of the Sri Lankan Tamils outside their office premises.

College students across Tamil Nadu have intensified their protests, demandingÂ  that India move a resolution against Sri Lanka at the UN’s human rights body meet to press Colombo to acknowledge commission of genocide against its Tamil population.