Sri Lankans held in Colombo after being arrested while trying to sail to Australia illegally to seek asylum. One of the asylum seekers deported from Britain said she was tortured and raped by Sri Lankan security services.

Fifteen Sri Lankan nationals have claimed they were tortured and subjected to inhuman and degrading treatment after they were forcibly removed to the country by the UK Border Agency, the Home Office has said. 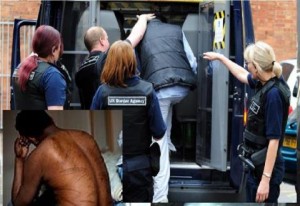 In a freedom of information (FoI) request, the Home Office revealed that between the end of the island’s civil war in 2009 and September 2012, 15 failed asylum seekers managed to escape back to Britain after being removed by the agency, the UKBA. They subsequently won refugee status after giving evidence to officials saying they were tortured in Sri Lanka.

Kulasegaram Geetharthanan, a solicitor in the UK, said that one of his clients, understood to be one of the 15 mentioned in the FoI statement, had been gang raped and tortured by Sri Lankan security services after being forcibly removed to the capital, Colombo, on a specially chartered UKBA flight in 2011.

The woman, in her late 40s, who now lives in London, told the Home Office that she was tortured and raped by security services who wanted her to reveal the whereabouts of her two sons, who had an affiliation to the Tamil Tigers (LTTE). After her ordeal she escaped the country a second time by bribing officials and re-returning to Britain on a false passport.

In the summer of 2012 her account of the attacks was accepted by immigration courts and she won refugee status.

The stories of torture following UKBA deportation come a little over a week after the Foreign Office minister Alistair Burt told the island’s BBC bureau that the UK had no direct evidence that people returned by the border agency were being tortured by Sri Lankan security services.

The comments were widely picked up in the country and the Sri Lankan defence ministry posted them on its website.

Questioned by the BBC’s correspondent, Charles Haviland, Burt said he had looked into the issue “extremely carefully” but found the UK did “not have direct evidence” of torture. He said the concerns of human rights groups had not been substantiated.

Speaking to the Guardian, Burt stood by his comments. However, the Foreign Office told the Guardian that following the Home Office release it was “urgently seeking further information from the Home Office about any allegations”. Having seen the Home Office’s FoI response, Burt said: “I’m well aware of claims of abuse having been made â€¦ We are also aware of claims [of torture] being made more widely â€“ that is why some asylum claims from Sri Lanka are accepted. But what I’m not aware of is evidence that those who’ve returned have substantiated [their] claims in relation to torture.”

The Tory minister, who is responsible for the brief for south Asia, the Middle East, and terrorism, added: “No one will be returned to Sri Lanka if there is a threat of risk of torture.”

Another charter flight removal of Tamils â€“ the ninth in under two years â€“ is due on 28 February, before a judgment in the upper immigration tribunal, which will scrutinise UK government guidance on removing failed Tamil asylum seekers and could halt the practice.

Asked if Sri Lanka’s security services were torturing people on their return to the island, the country’s deputy high commissioner in the UK, Neville de Silva, said: “I think you should pose that question to the Foreign Office and the British high commission in Colombo, because as Mr Burt has said, the British high commission â€¦ keeps tabs on people who are returned, and, as far as they are concerned, there’s been no evidence of torture. That is what Alistair Burt told us.”

De Silva said people who had left Sri Lanka illegally would obviously “claim torture or any other means” in order to claim asylum. “That’s an obvious thing to do even if you are not tortured,” he said.

Keith Best, chief executive of Freedom from Torture, who filed the FoI request with the Home Office, said: “It beggars belief that the UK government is still prepared to forcibly return more Tamils when its removals policy for Sri Lanka remains so out of date, and before the judiciary, which is considering the policy right now, has a chance to rule on the matter.

“We have shown that those with even low-level LTTE links, whether real or perceived, are at risk of torture, but our warnings have not been acted upon.”

The British Tamils Forum said that it had received information from numerous sources confirming the torture of deportees from the UK, and it had called for the latest flight to be halted.

The forum’s spokesman, Shan Sutha, said: “The sad reality is that the people are frightened to come forward to reveal the facts as their lives will be in grave danger.

“UKBA must temporarily halt all deportations to Sri Lanka until allegations are verified independently.”

In a statement, the Foreign Office said: “We remain concerned about human rights in Sri Lanka. Mr Burt has both publicly and privately raised our concerns, and called on the Sri Lankan government to investigate human rights infringements and prosecute those responsible.”

The minister was “extremely concerned about the allegations of torture but has not seen any evidence that substantiates the allegations”. But the Foreign Office was “urgently seeking further information from the Home Office about any allegations”.

The UKBA said each asylum case was “considered on its individual merits and where we find individuals are in need of our protection we will give it”.

The agency added: “The current position, supported by the European court of human rights, is that not every Tamil asylum seeker requires our protection.

“We do not want to prejudice the outcome of the court case by commenting further at this time.

“The cases referred to in the FoI [request] are individual cases, assessed on the evidence available at the time. This is not direct evidence that all asylum seekers are at risk on return.”