Sri Lankan asylum seekers rejected by Australia and sent home say they have been arrested, imprisoned without trial, and tortured, the Sydney morning herald reports. 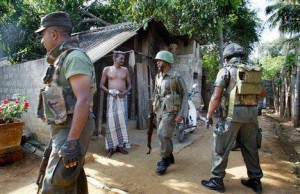 With about 150 Tamils now in the Australian detention system facing an involuntary return to Sri Lanka, a Herald investigation has uncovered instances where people sent home from Australian soil, or stopped by the Australian government from ever reaching the country, have been sent back to systematic state-sanctioned abuse.

Â One man said he was arrested at Colombo airport and held, without trial or charge, for 55 days. During his interrogation, he says he was hung upside down and beaten with batons in an effort to extract a confession that he was a member of the separatist terrorist organisation Liberation Tigers of Tamil Eelam, better known as the Tamil Tigers.

They say they were beaten by their former colleagues, and told they would be killed.

There are other cases, too. A 29-year-old Tamil man, whose name the Herald has chosen not to reveal, says he also lives in fear of being arrested and tortured again.

Â In October 2009, Sarath* was one of 254 asylum seekers on board a 30-metre wooden cargo boat headed for Christmas Island when the former prime minister Kevin Rudd telephoned the Indonesian President, Susilo Bambang Yudhoyono, asking the Indonesian navy to stop the boat.

Â It was taken to the Indonesian port of Merak, where the asylum seekers staged a sit-in protest. With a gravely ill mother at home, and seemingly no end to the impasse, Sarath got off the boat and was returned to Sri Lanka.

Â He, too, says he was arrested at the airport, and interrogated by the Criminal Investigation Department. Because he was from Sri Lanka’s north, he was accused of being a member of the Tamil Tigers.

Â Sarath says he was never a member or supporter of the Tigers. After questioning by police – including on the notorious fourth floor of the CID’s Colombo headquarters – Sarath claims he was handed over to the defence ministry’s national intelligence bureau.

Â Upside down and bleeding, Sarath claims he was repeatedly asked to reveal where the LTTE had hidden their arms caches at the end of the war. He told them he did not know.

Â He was released after 55 days, but remains, he says, under constant supervision. On the day we met him, we were forced to change plans at the last minute, because plain-clothes police were watching his home.

He still suffers crippling headaches, “from where I was kicked in my head”, and walks with a limp because of injuries inflicted.

Â The accounts detailed given to the Herald are in accordance with the findings of human rights groups, and the UN, which said in a recent report it was concerned by allegations of “widespread use of torture and other cruel, inhuman and degrading treatment of suspects”.

Â The Human Rights Watch deputy Asia director, Elaine Pearson, says her organisation has uncovered more than a dozen cases of asylum seekers tortured after being returned from Britain.

Â “We’ve documented cases of at least 13 people who’ve been returned to Sri Lanka, all Tamils, and who’ve faced arbitrary arrest, torture, in some cases rape, by government officials upon their return.”

Â She says countries such as Britain and Australia should not be deporting Sri Lankan Tamils back to the country where they continue to be persecuted.