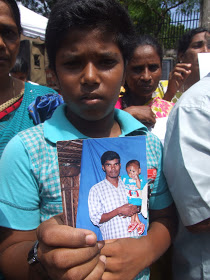 Mothers, wives, sisters and daughters of the Disappeared have taken part in repeated protests together with the remaining men folk in the family, and demanded for accountability and justice. Their tireless search continues, to find their missing sons, husbands, fathers and brothers.Â  Most married women are confused and frustrated over whether to continue to wear the â€œThaaliâ€ and â€œPottuâ€ (symbols of a Tamil married woman) or embrace widowhood. These women have been pushed to become the main breadwinners of the families, after the men folk in the family have gone missing.

Fathers of the disappeared in the North

“Where is my father?” asks Pavithran Jeevakumar from Mannar

Women of the disappeared from North and East

These photos were captured during the months of October, November and December 2012 in Colombo, Raddoluwa and Trincomalee. Displayed in the Photographs are family members of the disappeared persons who gathered to protest in front of the United Nations office in Colombo, to pay tribute to the Disappeared persons at the Monument of the Disappeared in Raddoluwa, and carry out a camphor campaign in protest against Disappearances.

The camphor campaign was jointly organized by the Committee for Investigating Disappearances (CID), and the Movement for the Release of Political Prisoners (MRPP). Women whose fathers, brothers, husbands and sons have been Disappeared over the past years, took part in this religious protest recently in Colombo. Nearly twenty five women from Batticaloa, Colombo, Jaffna, Kilinochchi, Mullaithivu andÂ  Trincomalee carried burning camphor pots from Sri Ponnambalawaneswarar temple in Kochchikade to Jeyanthi Nagar Sri Sivasubramaniya Swamy Temple in Ginthupitty while barefoot.

“I have searched everywhere, but nobody is telling the truth about my son” says Ashadevi Shanmugalingam

A camphor campaign for missing loved ones

Thousands of people have been Disappeared during the war, and even after the war was officially ended in May 2009. LLRC Recommendation 9.48 states â€œDirect law enforcement authorities to take immediate steps to ensure that allegations (of abductions, enforced or involuntary disappearances, and arbitrary detention) are properly investigated into and perpetrators brought to justice.â€ The Governmentâ€™s National Plan of Action stipulates â€œ6 monthsâ€ for implementation of 9.48, but for many families of the disappeared, investigations have yet to â€œbring justiceâ€.

“What happened to my two sons, who have been missing since May 2010?”, asks Noor Najeeba from Mattegoda

“What happened to my husband who has been missing since 1999 from Mullaithivu sea?” queries Nirmala Priyasharshini Nishantha from Trincomalee.

At the Monument of the Disappeared in Raddoluwa, Seeduwa

Direct law enforcement authorities to take immediate steps to ensure that allegations of abductions, enforced or involuntary disappearances, and arbitrary detention are properly investigated into, and perpetrators brought to justice.

Appoint a Special Commissioner of Investigation to investigate alleged disappearances and provide material to the Attorney General to initiate criminal proceedings as appropriate. Provide the Office of the Commissioner with experienced investigators to collect and process information.

Devise a centralized system of data collection at the national level, integrating all information with regard to missing persons.