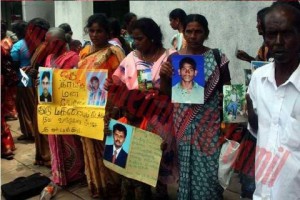 A group of Tamils from the north submitted a petition to the UN office in Colombo as well as the Human Rights Commission regarding the Sri LankanÂ police preventing them from heading to Colombo recently to stage a demonstration.

Organizers said that some 26Â people, including Tamils politicians and clergy,Â visited the UN office to hand over the peition and from there lodged a complaint at the Human Rights Commission office in Colombo.

On March 5th the police blocked a group of people heading to Colombo from the north to take part in a demonstration over the disappeared.

Some 10 bus loads of people mainly from Vavuniya and Mannar, which were preparing to leave Vavuniya, were blocked by the police.

The police had warned the people that there was information the buses may come under attack when heading to Colombo.

Two days later the UN had saidÂ there was no need for people from the north of Sri Lanka to go to Colombo to provide information to the UN on any issue.

â€œWell, there would be other conduits to be able to provide information if people feel they have information that they wish to hand over to the United Nations. There are other ways to do it if they cannot reach Colombo. So I am sure that that would be possible, to be able to receive information and not just via the country team in the country,â€ UN Spokesman Martin Nesirky had told reporters in New York.

The US Embassy in Colombo, in a strongly worded statement, had hit out at the government for preventing the people from the north from heading to Colombo to take part in the demonstration.

The Embassy called on the Sri Lankan authorities to allow free movement of these citizens as the right to freely express opinions is universal and protected under Sri Lankan and international law.