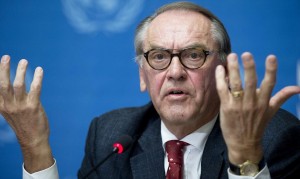 A copy of the resolution adopted on Sri Lanka at the TESO conference in Tamil Nadu, was handed over to the UN yesterday, the Tamil media reported.

According to the media reports, the resolution was handed over to the United Nations Deputy Secretary-General Jan Eliasson.

DMK treasurer M.K Stalin led the delegation to New York to hand over the copy to the UN.

Speaking to reporters after handing over a copy of the resolution, Stalin said that the UN official had shown interest on the issues faced by the Tamils in Sri Lanka.

The copy of the resolution was handed over at the time Sri Lanka was being discussed at the Universal Periodic Review (UPR) in Geneva.

The TESO conference had among others, demanded that the Indian government take all necessary steps to ensure a â€œtotal change of environmentâ€ in Sri Lanka and a life of equality and peace to the Sri Lankan Tamils, by â€œredeeming their political, economic and cultural rights.