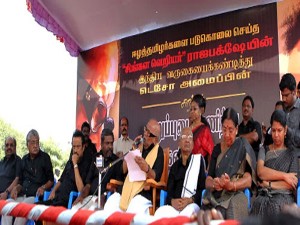 The DMK-backed Tamil Eelam Supporters Organisation (TESO) Monday decided to approach the supreme court to cancel the 1974 agreement between India and Sri Lanka and also declare the islet Katchatheevu as part of India, IANS reported today.

In a meeting held in Chennai, members of TESO passed a resolution to approach the Supreme Court to declare the agreement between India and Sri Lanka, transferring Katchatheevu to the latter and declaring the islet in Palk Strait as part of India.

According to TESO, the transfer of any part of Indian territory to another country has to be done by passing a constitutional amendment.

Regarding Katchatheevu, no such amendment was made and hence the transfer of the islet to Sri Lanka is void, TESO said.

The meeting also urged the centre to provide protection to the Indian fishermen against the attacks from the Lankan Navy.

In 2008, Jayalalithaa had filed a case in the Supreme Court challenging the transfer of Katchatheevu to Sri Lanka on the grounds that the transfer was not ratified by parliament by passing a constitutional amendment as per the court’s earlier ruling.

Later the state government’s revenue department has also impleaded in the case as a party. An application to hear the case early has been filed with the Supreme Court.

Katchatheevu is in the narrow sea dividing the two countries. The sea is rich in marine life, fishing for which has often led to clashes between Indian and Sri Lankan fishermen.