The international criminal court has handed down its first sentence, jailing for 14 years a Congolese warlord who recruited and used child soldiers.

Thomas Lubanga was found guilty in March of abducting boys and girls under the age of 15 and forcing them to fight in the Democratic Republic of the Congo’s eastern Ituri region in 2002-2003. 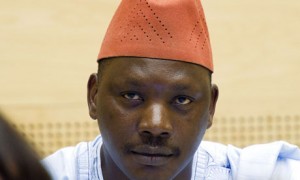 Lubanga, 51, is the first person convicted by the permanent war crimes tribunal.

The prosecution had asked for a “severe sentence” of 30 years. Luis Moreno-Ocampo, then chief prosecutor, said it was seeking the punishment “in the name of each child recruited, in the name of the Ituri region”.

But the prosecution also said it would be willing to cut the sentence to 20 years if Lubanga offered a “genuine apology” to victims of his crimes.

Children as young as 11 were recruited from their homes and schools to take part in brutal ethnic fighting in 2002-03. They were taken to military training camps and beaten and drugged. Girls were used as sex slaves.

Lubanga had pleaded his innocence and said he had not supported the use of child soldiers by the Union of Congolese Patriots militia. But in a unanimous decision, the judges said Lubanga was responsible.

He showed no emotion as the presiding judge Adrian Fulford read out the sentence on Tuesday.

Lubanga is an “intelligent and well educated” person, Fulford said, adding that this was a relevant factor in finding him guilty.

Human Rights Watch estimates that more than 60,000 people were killed in the conflict between Hema and Lendu ethnic groups in Ituri.

Before the sentence was passed, Géraldine Mattioli-Zeltner, international justice advocacy director at Human Rights Watch, said: “The sentence against Lubanga should be fair and reflect the gravity of the crimes for which he was convicted. Lubanga’s sentence is important not only for the victims who want justice done, but also as a warning to those who use child soldiers around the world.”

The conviction of Lubanga is related to the current conflict in eastern Congo, where rebel forces are advancing towards the provincial capital, Goma.

The mutiny is led by a renegade general, Bosco Ntaganda, who is also wanted by the ICC for recruiting and using child soldiers in Ituri in 2002-03.

The ICC has been criticised for focusing too heavily on war crimes in Africa and not the rest of the world. (The Guardian).