<![CDATA[Tens of thousands of Tamils poured into the Excel centre today, to mark the Maaveerar Naal - the Eelam's national day of remembrance - and honour those who died for in the struggle for freedom. <span style="font-family: Verdana; font-size: small;"> 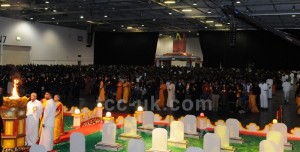 Decorated in the nation’s colours of red and yellow, the venue had a replica Thuyilum Illam in front of the stage, with a wall of photographs of Maaveerar along either side. A trio of life size tombstones with a flame flying in the centre, was ceremoniously draped with the national flag. At the back, a huge revolving column mosaiced with the faces of the nation’s Maaveerar was suspended above the entrance. The event commenced with the hoisting of the British flag by Gowsi Ananthasigamany of the Tamil Youth Organisation UK (TYO UK), followed by Tamil Eelam’s national flag, hoisted by Mr Thanam of the Tamil Coordination Committee UK (TCC UK) as the nation’s flag song played. Standing up for a moment of silence, all those present stood and remembered the nation’s fallen and their sacrifice. 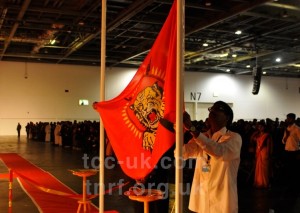 The flame of sacrifice was lit by the parents of the Maaveerar Captain Raj, after which tens of thousands of little candles were lit as the Thuyilum Illam song played and images of the now destroyed resting homes of the Maaveerar in the North-East played. It was a moving scene, that reduced several to tears as they held their candle in remembrance. (TG)Â ]]>