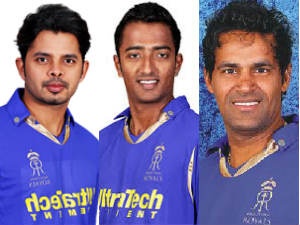 In a sensational development, Indian paceman S.Sreesanth and two of his Rajasthan Royals teammates Ajit Chandila and Ankeet Chavan were arrested by the Delhi police on the charges of spot fixing in the ongoing Indian Premier League.

The special cell of the Delhi police arrested Sreesanth from his friendâ€™s place in Mumbai while the other two cricketers were arrested on Thursday night from the team hotel at Nariman Point for their alleged role in spot fixing.

The arrest took place immediately after the players returned to their team hotel, following their match against Mumbai Indians at Wankhede stadium. The hosts won by 14 runs.

The Delhi police source said that these players were under the scanner for their role in spot fixing in some of the earlier IPL match although they did not elaborate which matches were under scrutiny.

The development comes as a shock for the IPL authorities who have time and again grappled with controversies and scandals ever since the league was launched in 2008.

IPL Chairman Rajiv Shukla said he was awaiting details on the incident.

Rajasthan Royals CEO Raghu Iyer said that the three players were picked up by Delhi police last night and the team management was co-operating with the investigation.

â€œRajasthan Royals has zero tolerance for corruption and we will take action, if charges are proved,â€ he said.

Rajasthan Royals also issued a statement in which they said that they are shocked by the development.

â€œWe have been informed that three of our players have been called in for investigation on spot fixing in matches. We are completely taken by surprise. We do not have the full facts at this point and are unable to confirm anything.